Service » Reinventing and Reinvesting in the Local for Our Common Good 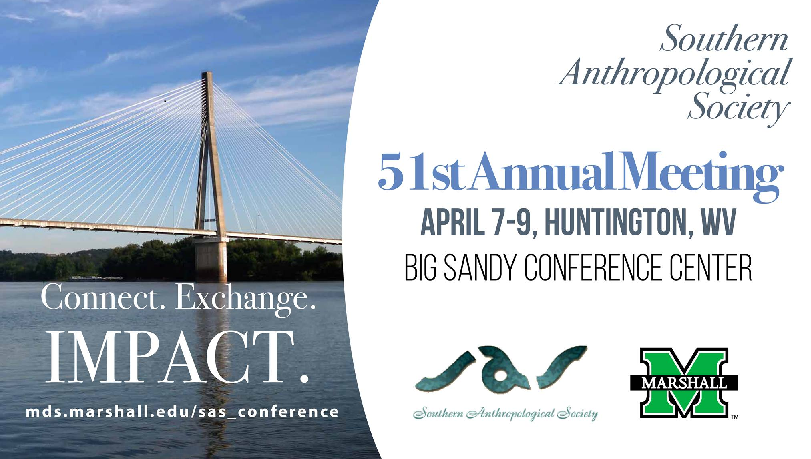 Reinventing and Reinvesting in the Local for Our Common Good

Serving as the Conference and Program Chair, I set the orienting theme for the 51st Annual Meeting of the Southern Anthropological Society to be publicly engaged, locally committed social science to bring together a variety of inter-disciplinary and non-academic interpretations to document processes of change at the local level, and imagine possible, resilient futures for the people and places where we live and work.

I envisioned a dynamic meeting space connecting both academics and non-academics in an exchange of experiences, ideas, and plans leading us to have positive impact together in our communities for the common good.

Beginning at least since the period of post-WW II reconstruction wherein a modern sense of the term “development” emerged in the specific context of international aid, anthropologists have engaged—not always enthusiastically—in both conceptualizing the processes and variously attempting to use their grounded means of knowledge construction to propose actions that might mitigate the effects of globalization at the level of the local. In answering challenges to their practice as well as to their communities of study during the twentieth century’s second half, anthropologists built on an earlier, but inconsistent disciplinary practice of broad contextualization achieved through tracing layers of history and political economy in the setting of multidimensional global flows together with a commitment to comparative analysis between fieldwork sites. Out of the intellectual tumult of a parallel reflexive turn within the social sciences as well as both new and old sources of cultural, social, and economic turmoil on the streets outside academe, anthropologists today have come to reassess the local itself as a meaningful domain as well as their engagement with it from the scalable context of a global perspective.

Anthropologists have come to passionately commit not only to providing holistic, multi-factorial attention to communities where they have built working relationships as a foundation to their methods, as expected objects of study, and as authentic expressions of their humanity but also detailing spatial and temporal connections of cause and effect between these places and broader contexts with the increasingly common goal of advancing social justice through publicly-engaged scholarship. While anthropologists and other social scientists rethink their connections to places and people at the intimate end of the scale, the local has been busy too. People for whom the local is humbly that place experienced as “home” are themselves engaged in individual and collective attempts to address their vulnerabilities in relation to increasingly fluid transfers of power between what only analytically appear as distinct levels of “local” and “global.” Today, both working (in the fieldwork sense) and living (in the everyday sense) in communities that are at times the victim and at others the beneficiary of these seemingly mercurial flows, as public intellectuals we have a social responsibility to build on our avowed disciplinary traditions of collaboration to work together—within and outside our profession—to shape diverse and sustainable arrangements that our data suggest will improve the common good now and for the future.

SAS Conference website http://mds.marshall.edu/sas_conference/ for detailed information on the conference.