Community Building among Indonesian Transmigrants: The Challenges of Social and Ecological Sustainability 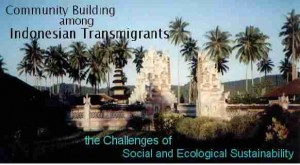 migration known as “transmigration.” This project was conducted entirely within the area of Kecamatan Dumoga, Kebupatan Bolaang Mongondow, in the province of North Sulawesi, Indonesia with the village of Werdhi Agung as the primary study site. [See maps of Indonesia and Study Area]

Although I had proposed working in two different sites located within different regencies of Sulawesi, in consultation with my project director, I requested–and was granted by the Fulbright agency–a modification so that the work could be conducted from a single location using a variety of local settlements. My reasons for making this modification included the fact that Indonesia was starting to experience the greatest social instability since the 1965 bloodletting following the what has been called an attempted “communist coup” which led to Suharto becoming Indonesia’s second president. The area near where I would have been located at the second site was among the most unstable in the country. Droughts, instability following a recent presidential election, and a severe economic crisis also contributed to a combination of social and ecological problems in many areas. As is not unusual in anthropological fieldwork, it also became clear that the time required to relocate would be prohibitively long and detract from the amount of data I could gather in the allotted time for my project. Fortunately, the area where I began my research turned out to have a wide variety of potential sites for comparison within a limited area making data collection relatively unproblematic from across varied groups in terms of such variables as economic and cultural background, ethnicity, environmental pressures, length of time since relocation, and degree of governmental involvement in resettlement.

The proposed objectives of this research project were to understand how transmigrants: (1) form viable households where at least basic material and emotional needs are filled; (2) develop networks of social and economic affiliation and support; (3) establish social roles and patterns of social interaction; (4) forge new collective identities; and (5) construct meaningful place and community. Most important was to understand how transmigrants accomplished these things as migrants in the context of increasingly global forces brought out most poignantly through the recent monetary crisis affecting all of Indonesia and precipitating increased social tensions throughout the country and in the unusually long dry season. Further questions that I sought to answer included: How do both relocated and local families manage to create mutually meaningful place and a productive community with backgrounds not only of often different social and material practices but also distinct life-course experiences? What are the consequences of relocation on individual sense of self and place and on group identity?

My research relied, in large part, on what might be called oral history. Most of my time was spent conducting interviews with various village officials both from the original group of transmigrants and their offspring. I have also relied on the general anthropological approach of participant-observation, that is, becoming involved as much as possible in community life and observing the kind and nature of interactions among village residents. In particular, participant-observation allows the long-term researcher to assess the degree of correspondence between what information is obtained through more formal means such as interviews and what is potentially observable on the ground. Through these two methods and extensive reflection on the many accounts I received across two generations and a vast range of individual experience, I continually refined my approach during my time in the Dumoga Valley area such that the depth of my understanding on the specific questions noted above was greatly increased.

I completed a general, closed-ended social survey of people across as representative a slice of the primary village of study, Werdhi Agung, in each of its six administrative units or dusun. Total respondents numbered approximately 150 households. In addition, I completed a total of around 50 among respondents in three other villages nearby. This allowed me even greater refinement in my approach as well as revealing greater diversity of experience and opinion than I might have otherwise been exposed to or thought would be present. As I am studying not only individual level processes but also the more difficult “community” or social level processes, adequate knowledge of the range of feeling and perspectives is essential for having an ethnographic grasp of these collective processes. Additionally, this social survey is intended as a representative sample of community members in order to serve as supplementary material to the more in-depth information that I obtained through formal interviews as well as to raise points that might be clarified in later formal interviews specifically designed to answer these points. It this later regard, the social survey was enormously rewarding.

In summary, I relied on a mixed method approach designed to: (1) collect narrative accounts on community building and construction of place; (2) obtain individual and cultural concepts about community building and place; (3) assess correspondence between transmigrant ideas about community building, construction of place, and their everyday practices; and (4) historically contextualize the processes of change and to understand the particular background or life-course experiences of individuals and groups. This approach combined typical ethnographic as well as more demographic techniques — such as the aforementioned survey–in a human geographic and ecological conceptual framework designed to illuminate my research questions through the focused study of transmigrant settlements. These settlements have been–and continue to be–faced by challenges to community building and construction of place originating at both the local, national, and international levels. Such challenges include: Misunderstandings between the transmigrants and local residents as to the meaning and purpose of the transmigration program; persistent issues related to land tenure; the recent political unrest in Jakarta which has had an impact locally by providing a “model” to people for dealing with perceived injustices in the political system; and the more general economic downturn felt at first in Southeast Asia but already now having global consequences.

I established long lasting contacts in the local area where I conducted my research among both the general population and officials as well as among the various Indonesian authorities responsible for the administration of not only the transmigration program locally and nationally, but also those authorities who would be responsible for making my future research in Indonesia possible. I would consider it highly valuable to develop long-term longitudinal studies of the sites documented during my recently completed project. Such studies build on prior research and through systematic comparison incorporating a time dimension can document transformation and development while blending ethnography and survey, synchrony and diachrony.

Thus this early research is only the first part of what I hope will be at least a two-part study. Such follow-up is critical in a world of localities that are changing ever more rapidly in the wake globalization. It is my hope that this research might shed light on this process of change linking modern nations and people economically, politically, and through different media and transportation technologies. My own interest in local communities and sense of self and place focuses my attention on the various strategies local peoples–indigenous or “traditional”–devise in order to resist challenges to their autonomy, identity, and livelihood or ways in which they negotiate new identities and relationships with larger trans-local systems. This research thus forms the basis of further studies which may be designed to document the emergence of new forms of political mobilization and cultural expression from the interchange of local, regional, national, and international cultural forms and forces.

An article presenting details from this research was published by the international journal Ethnology.

ABSTRACT:  Transmigration settlements are planned according to Indonesian government priorities, which intend them to help build and imagined community, a unified nation.  They are also places where settlers struggle to build their own vision of community as a place where they feel that they belong.  This article introduces the history of the Indonesian program and the place of Sulawesi transmigration settlements in nation-building (keywords: Indonesia, nationalism, development, transmigration, community) [See article in Publications]